NOTE: Garnett for Monocle will eventually be deprecated and will only be available for Monocle3.

Garnett is a software package that faciliates automated cell type classification from single-cell expression data. Garnett works by taking single-cell data, along with a cell type definition (marker) file, and training a regression-based classifier. Once a classifier is trained for a tissue/sample type, it can be applied to classify future datasets from similar tissues. In addition to describing training and classifying functions, this website aims to be a repository of previously trained classifiers.

Garnett runs in the R statistical computing environment. You will need R version 3.5 or higher to install Garnett.

To install Garnett directly from the Github repository, use the following instructions:

You're now ready to install Garnett:

After installation, test that Garnett installed correctly by opening a new R session and typing:

Questions about Garnett should be posted on our Google Group. Please do not email technical questions to Garnett contributors directly. 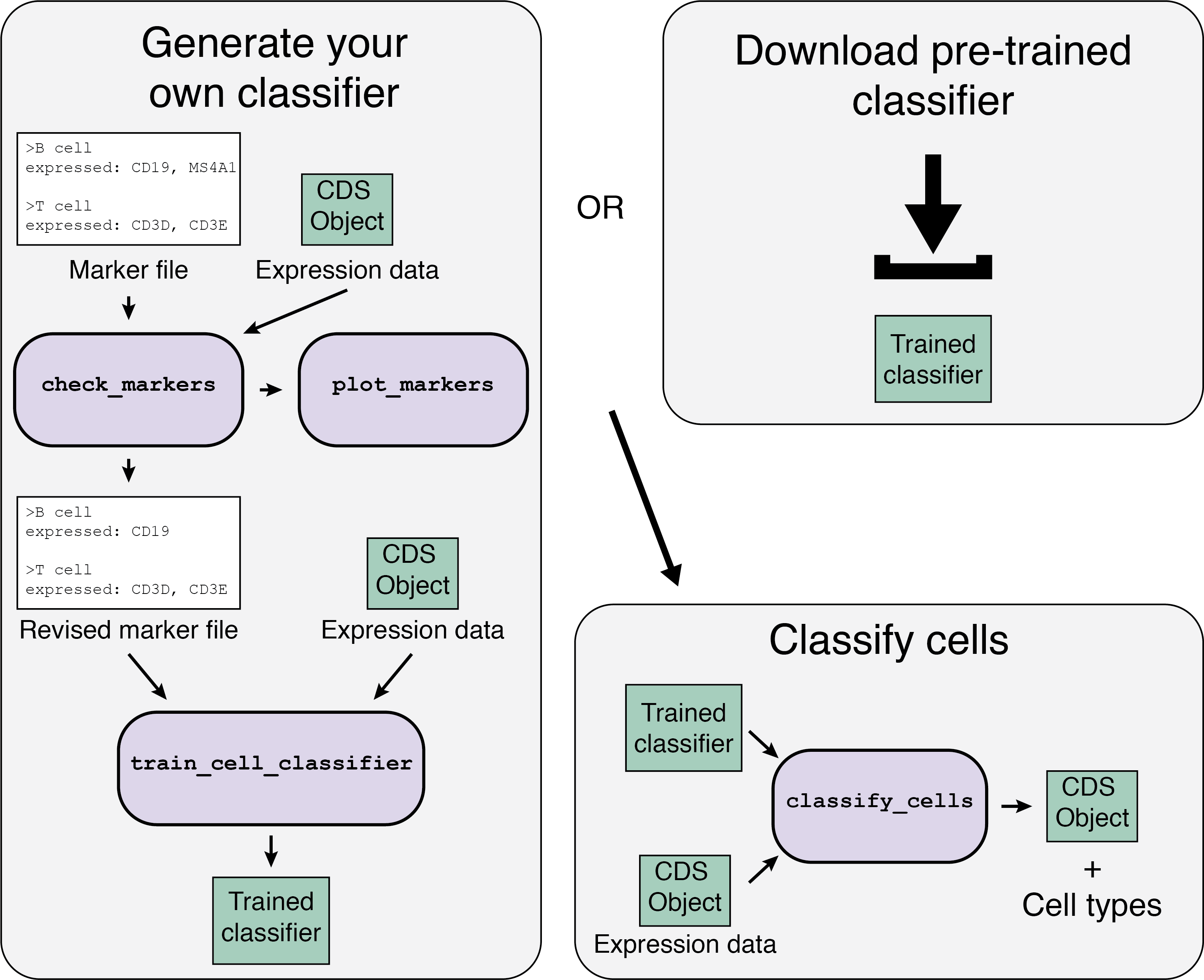 The Garnett workflow has two major parts, each described in detail below:

1a. Using a pre-trained classifier

There are two options for the first part of the Garnett workflow: using a pre-trained classifier, or generating your own classifier. 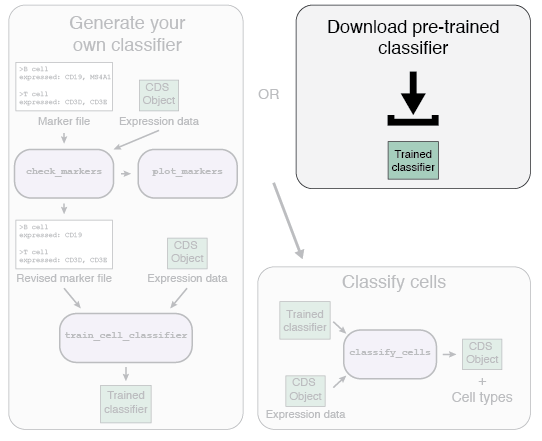 To use a pre-trained classifier, first download the classifier, and then load it into your R session using:

Once you've loaded the classifier, go on to part 2, Classifying your cells

1b. Train your own classifier 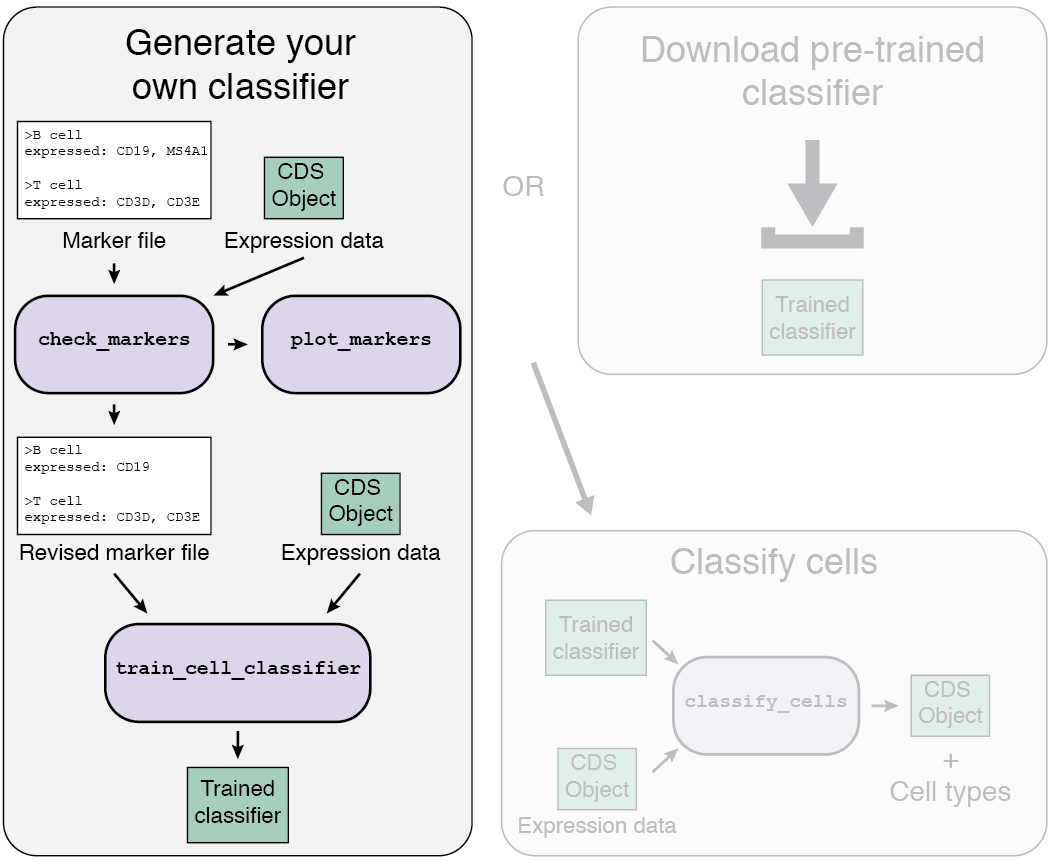 If a classifier doesn't exist for your tissue type, or doesn't include the cell types you expect in your data, then you'll need to generate your own.

The first step to train your classifier is to load your single-cell data.

Because Garnett builds on Monocle, data for Garnett is held in objects of the CellDataSet (CDS) class. This class is derived from the Bioconductor ExpressionSet class, which provides a common interface familiar to those who have analyzed microarray experiments with Bioconductor. Monocle provides detailed documentation about how to generate an input CDS here.

As an example, Garnett includes a small dataset derived from the PBMC 10x V1 expression data [1].

Besides the expression data, the second major input you'll need is a marker file . The marker file contains a list of cell type definitions written in an easy-to-read text format. The cell type definitions tell Garnett how to choose cells to train the model on. Each cell type definition starts with a '>' symbol and the cell type name, followed by a series of lines with definition information. Definition lines start with a keyword and a ':' and entries are separated by a comma. Note: the Garnett syntax allows for entries following the ':' to move onto following lines however, you may not move to a new line mid entry (i.e. you can go to a new line only after a comma).

There are several ways to define cell types in the Garnett marker file format. In general, each cell's definition can have three major components. Only the first component is required.

The first and most important specification for a cell type is its expression. Garnett offers several options for specifying marker genes, detailed below.

This is the default way to specify marker genes for your cell types. When using this specification, Garnett calculates a marker score for each cell, accounting for potential leakage, overall expression levels, and read depth. expressed: markers should be specific to the cell type being defined.

This is an alternative way to specify expression, which can be useful if you know an exact range you expect the expression of a gene to occupy. In general however, we do not recommend using these specifications because they will not account for read depth and overall expression in each cell. Values are in the same units as your input data.

In addition to expression information, you can further refine your cell type definitions using meta data. This is also where you will specify any subtypes you expect in your data.

subtype of: allows you to specify that a cell type is a subtype of another cell type in your definition file.

Lastly, we highly recommend that you document how you chose your marker definitions. To make it easier to keep track of, we provide an additional specification - references: - that will store your citation information for each cell type. Add a set of URLs or DOIs and they will be included in your classifier. See here for functions to get access to this information.

Similar to R code, we have included a comment character # so you can add notes/comments in your marker file. Anything after a # on the same line will be ignored by Garnett.

At the moment, the Garnett marker file cannot have carriage returns (\r), which will be included automatically if you generate your marker file in certain Windows text editors. Instead, you must use newline characters (\n). There are many ways to replace carriage returns on Windows, for example using Notepad++ you can use replace, choose extended, and replace all \r with \n. I intend to address this in a more automated way soon.

In addition to the small included dataset, we have included two example marker files with the package. Here are the contents of "pbmc_bad_markers.txt"

Besides the CDS object and the path to the marker file, there are a few arguments to add:

After generating your marker_check data.frame, you can use our built in plotting function plot_markers to view the results. 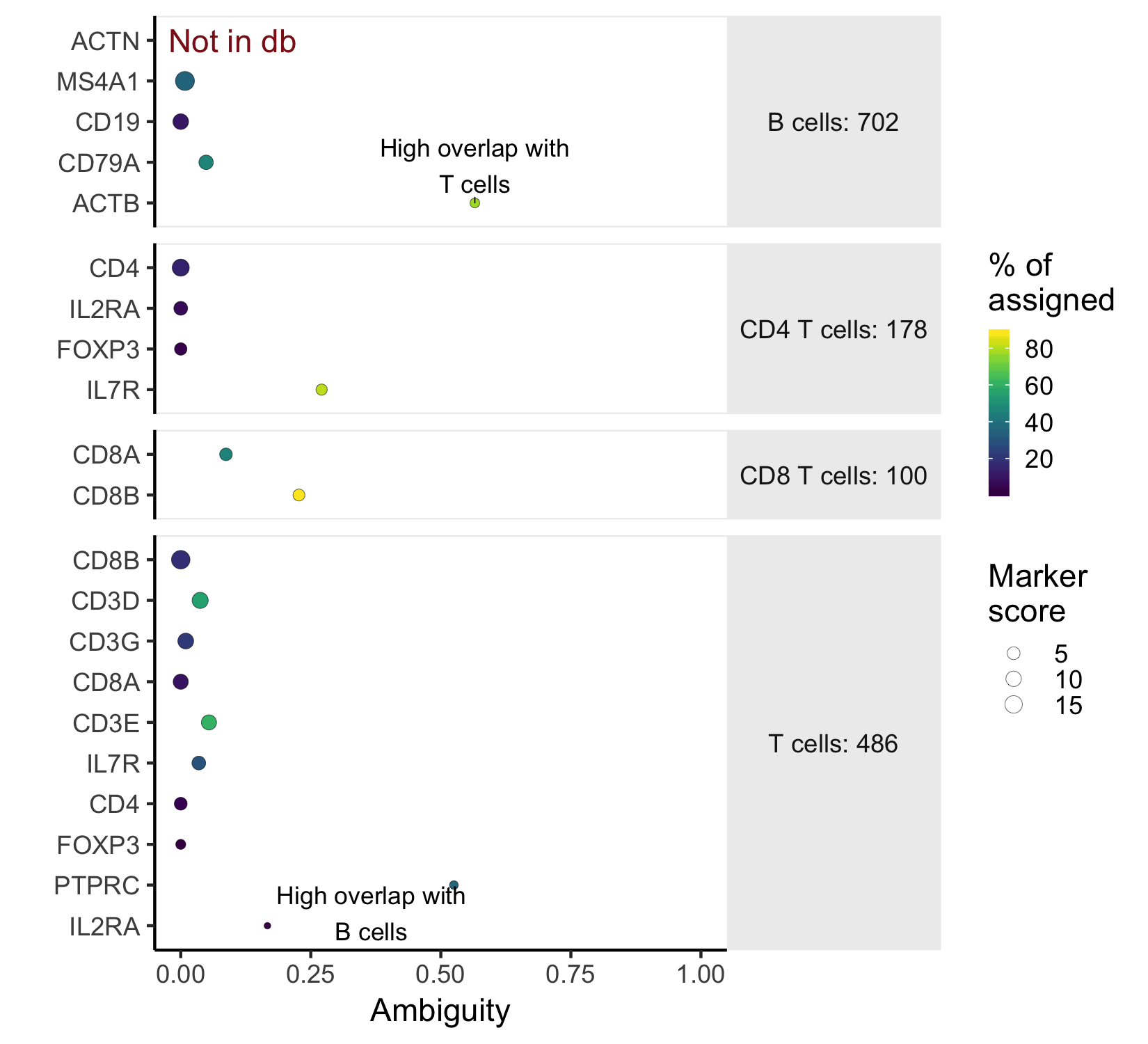 This marker plot provides some key information about whether the chosen markers are good. First, The red note 'not in db' lets us know that the marker ACTN was not present as a 'SYMBOL' in the org.Hs.eg.db annotation. In this case, it's a typo. Next, the x-axis shows the ambiguity score for each of the markers - a measure of how many cells receive ambiguous labels when this marker is included - in this case, ACTB and PTPRC have high ambiguity and should be excluded. The last piece of relevant information is what percent of all the cells nominated in a cell type were chosen because of that marker. This is indicated by color.

NOTE: The values output by check_markers and plotted by plot_markers are estimates of the numbers of cells that could be chosen by the classifier. However, it uses heuristics to quickly find candidate cells, and will not exactly match the cells that are chosen by the marker. Please use the numbers as relative measures, rather than absolute representations of the training set.

After making a marker plot, you may want to revise your marker file. In our toy example, we'll remove ACTN, ACTB and PTPRC to get our final 'pbmc_test.txt' marker file.

No ENSEMBL in your db

By default, Garnett converts gene IDs into ENSEMBL for use in the classifier. This allows classifiers to be portable so they can classify future datasets that might have different gene IDs. For some organisms however, ENSEMBL IDs are either not available or not commonly used. In these cases, you can use the parameter classifier_gene_id_type in both train_cell_classifier and check_markers to specify a different ID type. The value you choose will be stored with the classifier, so you do not need to specify it again when classifying future datasets.

Now it's time to train the classifier. The arguments should be pretty close to those for check_markers. The one parameter I am changing from default below is the num_unknown argument. This tells Garnett how many outgroup cells it should compare against. The default is 500, but in this toy dataset with so few cells we want fewer.

After running train_cell_classifier, the output object, of type "garnett_classifier" contains all of the information necessary to classify cells.

Garnett classification is trained using a multinomial elastic-net regression. This means that certain genes are chosen as the relevant genes for distinguishing between cell types. Which genes are chosen may be of interest, so Garnett includes a function to access the chosen genes. Note: Garnett does not regularize the input markers, so they will be included in the classifier regardless.

The function we use to see the relevant genes is get_feature_genes. The arguments are the classifier, which node you'd like to view (if your tree is hierarchical) - use "root" for the top node and the parent cell type name for other nodes, and the db for your species. The function will automatically convert the gene IDs to SYMBOL if you set convert_ids = TRUE.

We explained above how to include documentation about how you chose your markers in your marker file. In order to get this information back out - to see how markers were chosen for an already trained classifier - use the function get_classifier_references. Besides the classifier, there is one additional optional argument called cell_type. If you pass the name of a cell type, only the references for that cell type will be printed, otherwise they will all be printed.

We encourage you to submit your high quality classifiers to us so we can make them available to the community. To do this, open a special issue and fill out the form in the Garnett github repository. Click here and click the "New issue" button to get started! 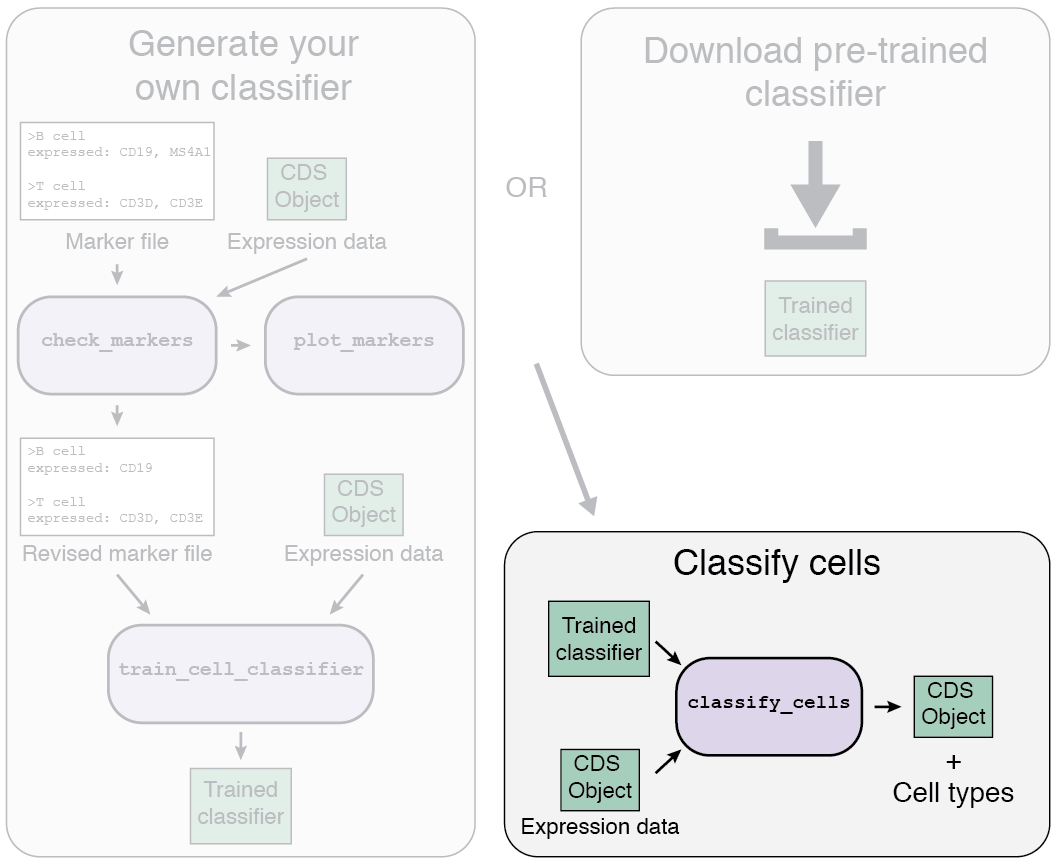 If you haven't loaded your data yet (because you're using a pre-trained classifier), now is the time!

Because Garnett builds on Monocle, data for Garnett is held in objects of the CellDataSet (CDS) class. This class is derived from the Bioconductor ExpressionSet class, which provides a common interface familiar to those who have analyzed microarray experiments with Bioconductor. Monocle provides detailed documentation about how to generate an input CDS here.

As an example, Garnett includes a small dataset derived from the PBMC 10x V1 expression data [1].

Once you've got your classifier, it's time to classify your cells using the classify_cells function! The key arguments are:

The classify_cells function returns the input CDS object with one (or two if cluster_extend = TRUE) new columns in the pData table containing the Garnett classifications. 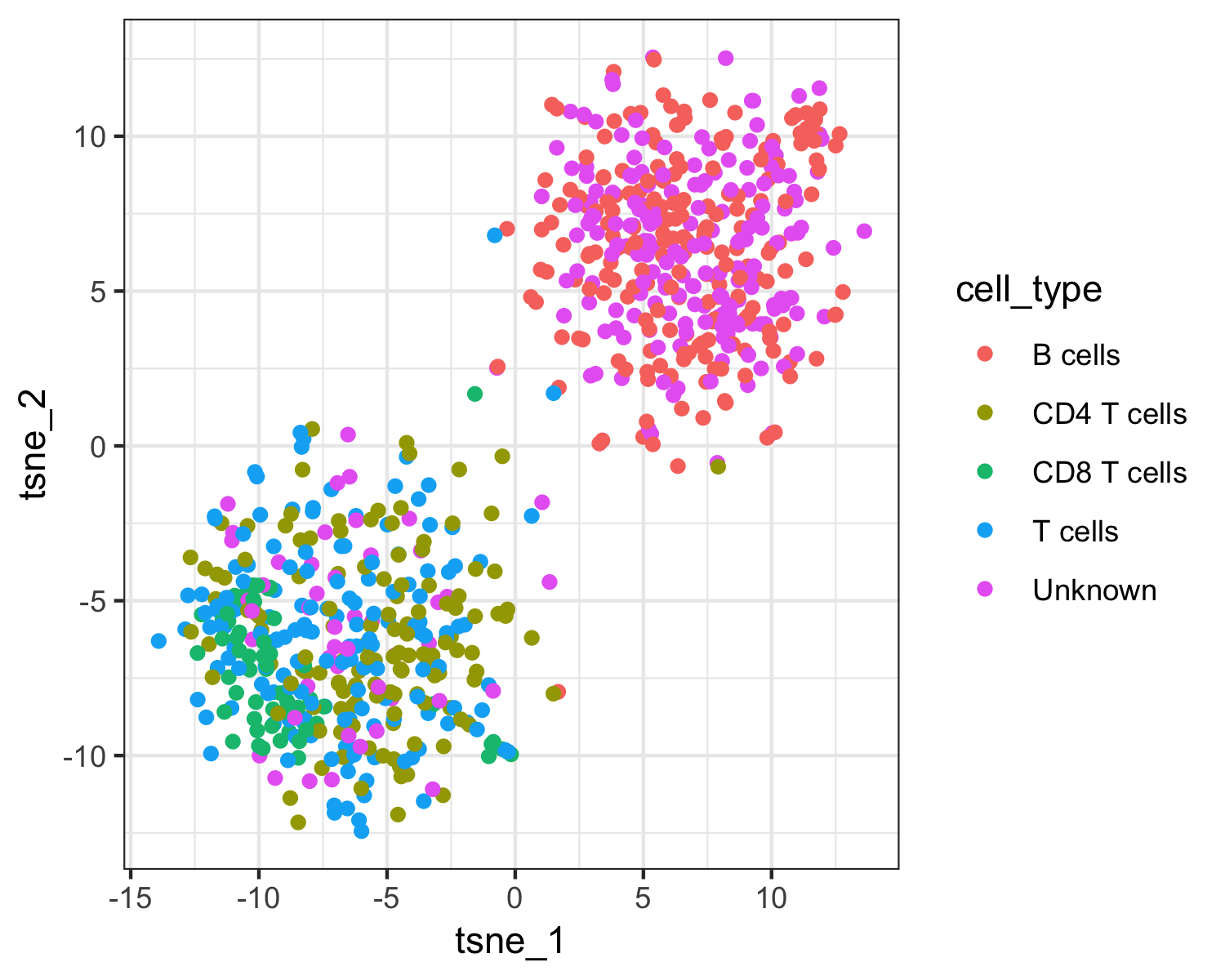 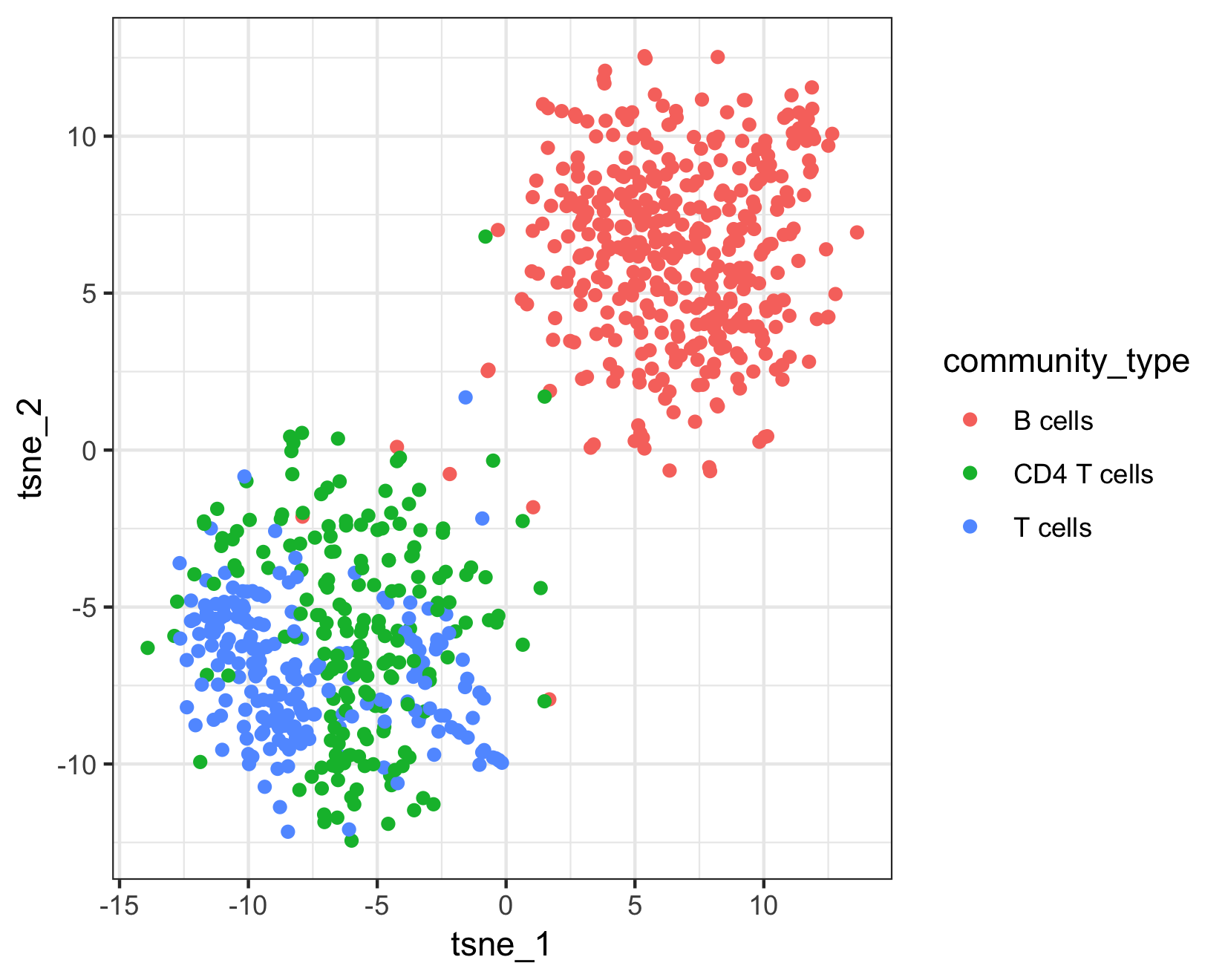 Because this example data is from a FACS sorted cell sample, we can compare Garnett's assignments to the "true" cell types. 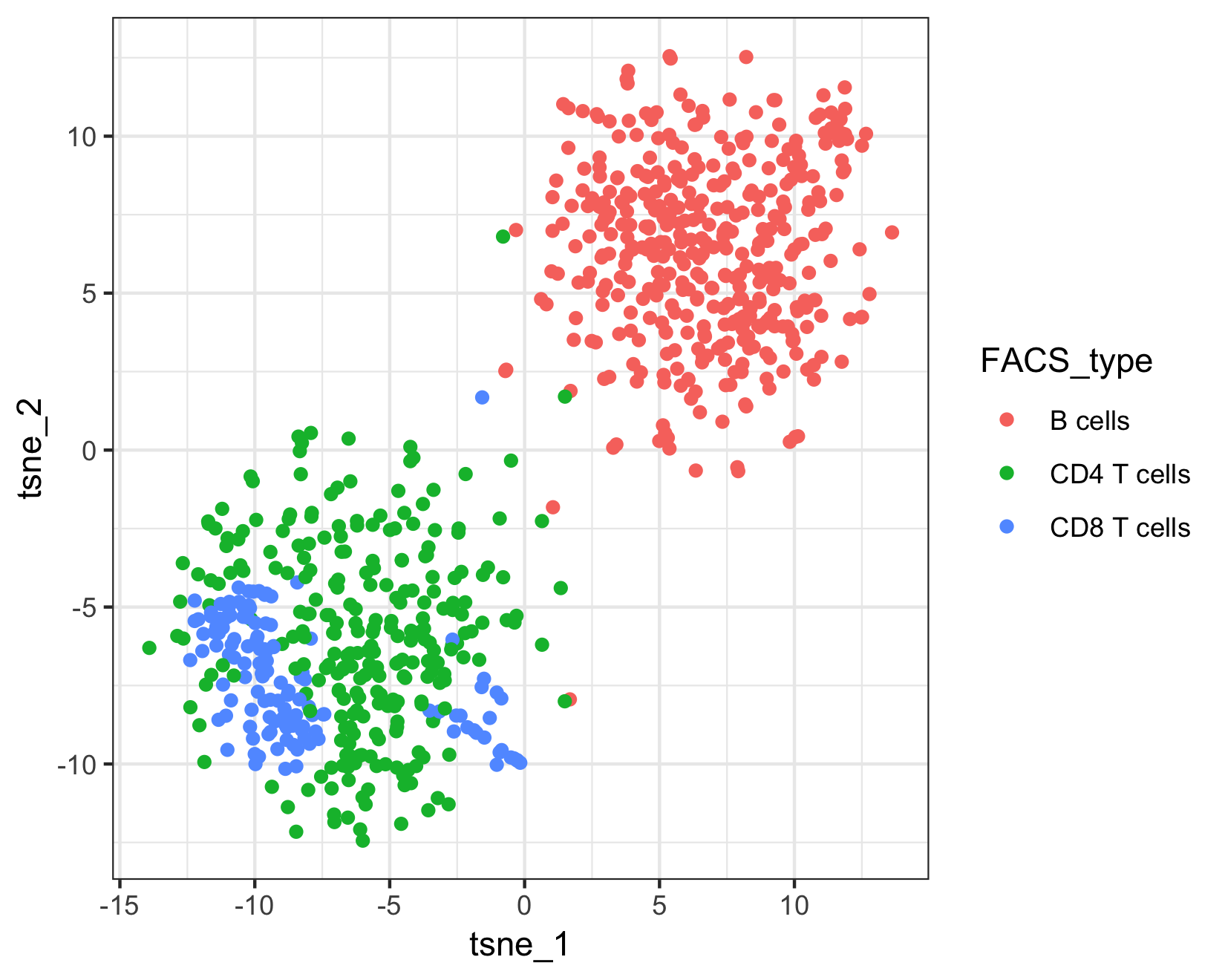 Here, we provide examples of a few of the common marker file errors and potential outcomes in Garnett's classification. For all panels, a classifier was trained on the 10x PBMC version 2 (V2) data and the classifier was then used to classify the 10x PBMC version 1 (V1) data shown above. The first panel is colored by the FACS-based 10x cell type assignments. The remaining panels are colored by the Garnett cluster-agnostic cell type assignment.

My species doesn't have an AnnotationDbi-class database

If your species doesn't have an available AnnotationDbi-class database, then Garnett won't be able to convert among gene ID types. However, you can still use Garnett for classification. Set db = 'none' and then be sure that you use the same gene ID type in your marker file as your CDS object. When db = 'none' Garnett ignores the arguments for gene ID type.

If you use Garnett to analyze your experiments, please cite:

Garnett was developed by Hannah Pliner in Cole Trapnell's and Jay Shendure's labs.

This vignette was created from Wolfgang Huber's Bioconductor vignette style document, and patterned after the vignette for DESeq, by Simon Anders and Wolfgang Huber.